I started my morning off with a trip to the dentist.   It’s not the most pleasant way to begin the day and truthfully I had no idea that I even had an appointment.  There was some sort of a mix up at the office—they thought Piyush had an appointment at 7am, so they called to remind him about it.  He said he didn’t make the appointment, so they thought maybe it was me.  They called me and I had no idea that I made an appointment either (especially at 7!  on my day off!).   Since I was free for the day, they convinced me to go in and get my pearly whites cleaned and checked out.  Unfortunately, Dr. Watkins gave me some bad news…

This princess is getting a new crown!  I’ve never had a crown before—actually I’ve never really had any dental work, aside from some cavities filled.  Sadly it’s because of one of those cavities (mostly the really bad job my prior dentist did filling it) that I now need this crown.  Ok, and it might also be that I drank too much soda as a kid…and too much hard liquor as a college student, but there’s nothing I can do to change that now.  The damage has been done, my friends.

I was out of the dentist’s office in about an hour, and since I was already awake—and functioning—I decided I might as well check out the thrift store and see if I could find anything neat.  Today was a bust.  I didn’t find anything super exciting, but I did get a new book to read, a shirt for Piyush, some canning jars, a terra cotta garlic roaster and a cake platter.  Total spent?  Around 10 bucks.

There was a big dresser that matched the one I bought for my entry way, it was obviously from the same set.  I thought it’d make an awesome buffet for our dining room (with a little elbow grease and repurposing), but the price tag said $50.  That’s about 30 dollars too much, in my opinion.  So I passed.

When I got bored of thifting, I grabbed a few groceries and headed home to a sink full of dirty dishes.  At home, I was quickly reminded that it was winter and I needed to put on boots and stop wearing my totally awesome crocs: 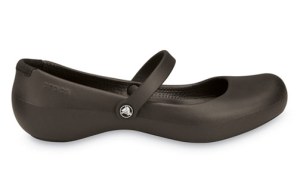 Seriously, I never thought I’d be a croc kind of girl…but I love these shoes!  They’re slide ons—so they’re quick.  They’re durable, comfy and rubber (or something like that…I don’t really know what they’re made from, actually).  I hate wet feet, so these do a good job of keeping them dry.   I wore them everyday in India—even when we were climbing the steep hills of Darjeeling (I have really high arches and walk more on the sides of my feet. Even without my custom insoles these shoes give me no pain.)  Basically, I love this shoe.  But sadly, they have no traction…and are terrible on ice!  Lucky for me, I am a very graceful faller.  Like, really graceful.  You should have seen it.  I slipped on the ice, went into a perfect lunge—didn’t even crack my knee on the ground—and slid back up, all in one motion.  It was like some sort of weird ice ballet.  I bet it looked awesome.

After shimmying my way down to the mailbox, trying to avoid the ice…and back up to the house, I decided to make Piyush a nice dinner.  I had some chicken breasts, so I knew that was going to be the base.

I eventually settled on seasoning the chicken breasts with marjoram, making a simple pan sauce and serving it all with mushrooms and roasted purple potatoes.  I was worried he wouldn’t like it.  But it turned out really delicious and he scarfed it down…no complaints.  He even told me the recipe was a “keeper.”  Yay.

The purple potatoes were amazing!  I’ve never had them before so I had to try them out.  They taste really similar to red potatoes…but they’re such a beautiful color!

I cut them in half (or quarters, if they were big), drizzed them with some olive oil, seasoned with salt/pepper, added some chopped rosemary and smashed garlic and then roasted in the oven at 400 degrees F for 20 minutes.  Simple.  Easy. Fast.

While they roasted away, I got to work on the chicken.

Melt 1 tablespoon butter with 1/2 tablespoon oil in large nonstick skillet over medium-high heat. Add chicken to skillet and sauté until just cooked through. Transfer chicken to plate; tent with foil to keep warm.

Melt remaining 1 tablespoon butter with1/2 tablespoon oil in same skillet. Add mushrooms, shallots, and 2 teaspoons marjoram. Sauté until mushrooms are brown and tender, about 6 minutes. Season to taste with salt and pepper. Transfer to bowl.

Divide mushrooms among 4 plates. Top mushrooms with chicken. Spoon sauce over and serve.

This meal came in at around 650 calories for my portion (pictured above).  It’s not something I’d eat all that often, because it’s so rich.  But it’s definitely something I’ll make again!  It had a lot of flavors and they all worked extremely well with one another.  The original recipe didn’t call for rosemary but I thought it’d be a good addition…and I was right!

If you’re looking to impress someone (Valentine’s Day is around the corner….I’m just sayin’), this will do it.  This meal is seriously restaurant quality…and I’m not talking “Olive Garden” or “Applebees” kind of restaurants.  This tasted like something I’d expect from a really fancy place.  It was that good!

Now that I have a full belly, Teen Mom is over, and my face has been cleansed…it’s off to bed!  I have a long day tomorrow!