Lately I’ve been making some recipes that require many different steps or “recipes” within the recipe.  To make it easier on me (and probably for you, too!), I’ve decided to split these recipes up into a few different posts.

Because I want to share this stellar Lemon Cheesecake with Blackberry and Ginger Spiced Topping (jam) with you guys: 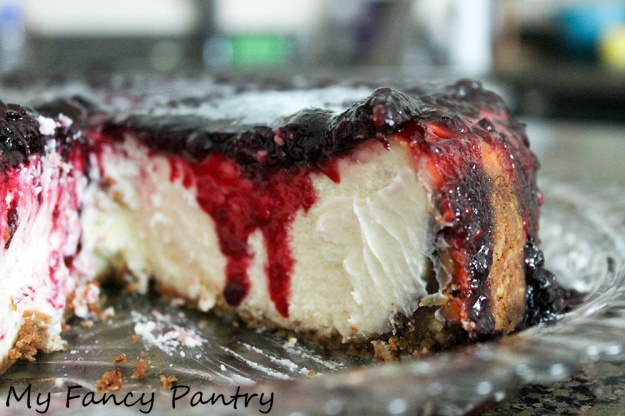 I’ve got to first tell you how I made the topping.

But trust me, this jam is so fabulous, it’s definitely worth the time spent on it.  You will not be disappointed!

To make this jam, I started by combining 1 cup of sugar and 2 cups of water in a sauce-pan.

I sliced some ginger into discs and also washed the blackberries.

Then I dumped half of the blackberries, the lemon juice and ginger in the pan along with the water and sugar.   And because I always feel the need to “Indianize” (is that a word?!) nearly everything I make, I tossed in some chai masala (recipe coming soon!) for good measure.

I make my own chai masala (stay tuned for this basic recipe!), and recommend that you do, too!  But if you don’t want to grind all those spices, this masala can be purchased pre-made at your local Indian grocer.  You could also toss in a few whole spices instead.  Cinnamon, green cardamom, peppercorns and cloves are great choices! 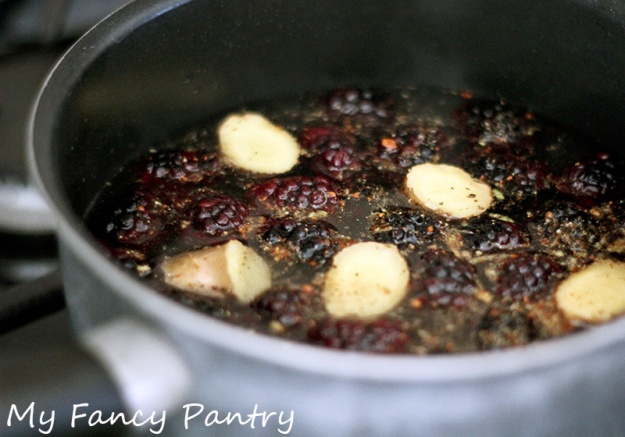 I let this mixture simmer for around 15 to 20 minutes until the blackberries began to break down (they’ll actually turn red!) and the liquid thickened slightly.  Once my jam reached that point, I took it off the heat and strained it through a sieve, using a spoon to press the mixture through as much as possible. 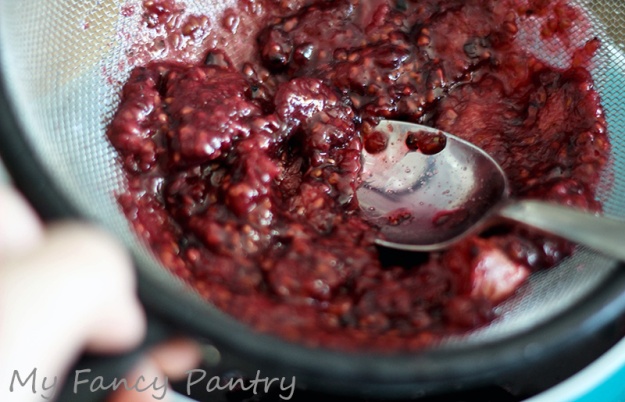 I transferred the syrup back into the pan, brought it to a boil and then tossed in the other half of my blackberries.

I then let the jam simmer for a good 20+ minutes, stirring occasionally, until the blackberries broke down and the jam reached the right consistency.

It should be nice and thick.  The best way to tell if your jam is the right consistancy is to dunk a spoon in.  The jam should coat and cling to the spoon. 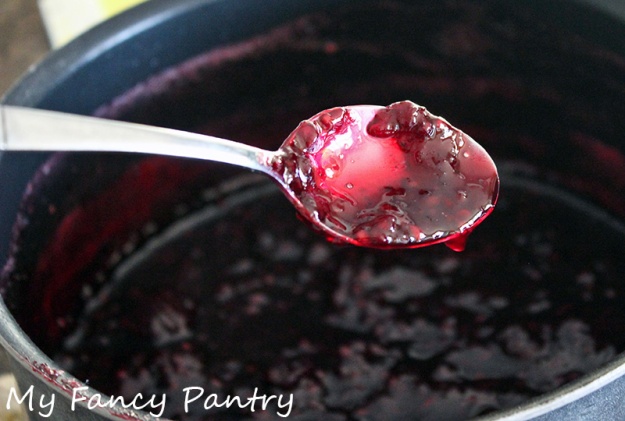 This jam is delicious!  If you decide not to use it for making a cheesecake, I’d recommend slathering it on crepes or pancakes!

makes about 1.5 cups of jam

* Prepared Chai Masala is available at your local Indian grocer.  It can also be made at home, which I highly recommend!  My recipe for Chai Masala will be posted soon!

the awesome lemon cheesecake recipe!  Unfortunately, I work all weekend…so check back early next week!