Giveaway is now over!  Sadly, I didn’t get a response from Emily R. before the Jan. 2 deadline, so I have to pick a new winner.  Emily, if you read this…send me a message!  I can’t send you the sausages, but I’d love to send you a little something else!

New winner:  Congratulations to commenter #3 (picked via random.org), tcarolinep!!!  I’ll be sending you an email!

Because I work on Christmas this year, I won’t have time to go to Grandma’s and have a taste of her fluffy cinnamon rolls, nor will I have time to whip up a pan of my own.  Instead, I plan on making Piyush a quick and easy recipe using Gold’n Plump Chicken Sausages, pesto, gruyere and pre-packaged croissant roll dough. 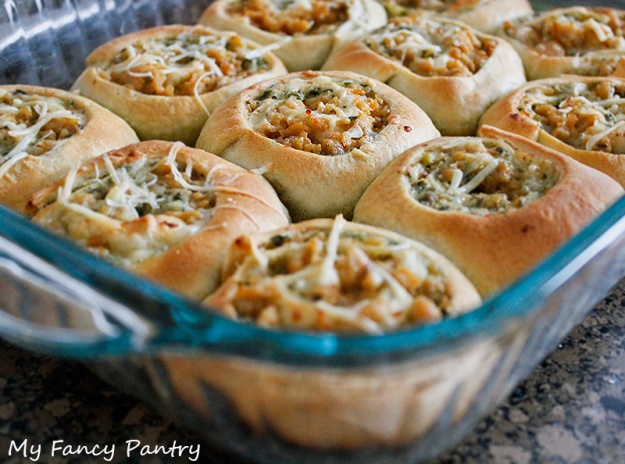 Gold’n Plump first contacted me a little over 6 months ago and asked me to try their new line of Chicken Sausages.  I agreed, and both Piyush and I were impressed with how good they actually were.  They really tasted like pork sausage, and had significantly less fat and calories.

At that time I used the sausages to make a Spicy Chicken Sausage Pizza with Chipotle-Pepita Pesto…and it was a hit!

This time when Gold’n Plump contacted me and offered to send me more chicken sausages–as well as to send one of my readers a fabulous sample pack (scroll down for giveaway)–I had Christmas morning on my mind.

I wanted to use the sausages to make my husband a special Christmas morning breakfast.  Even if I couldn’t be around, at least I’d know he was sitting at home with a full tummy. 🙂 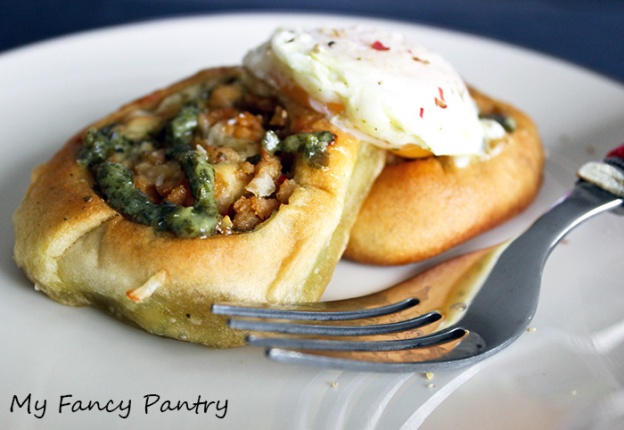 Sausage, figs and chevre is an absolutely stellar combination!  Seriously.  You should try it!

Piyush felt the combination of the sausage and the gruyere was just a little too salty for his tastes.  My friend, Megan, thought they were perfect.  Haha…I just can’t please everybody, I guess!

To make the rolls, I started by removing 3 Gold’n Plump Italian Parmesan chicken sausages from their casings.

I tossed the crumbled meat into a cast iron pan over medium-high heat.  Once it was cooked through, I turned off the heat and gave it some time to cool. 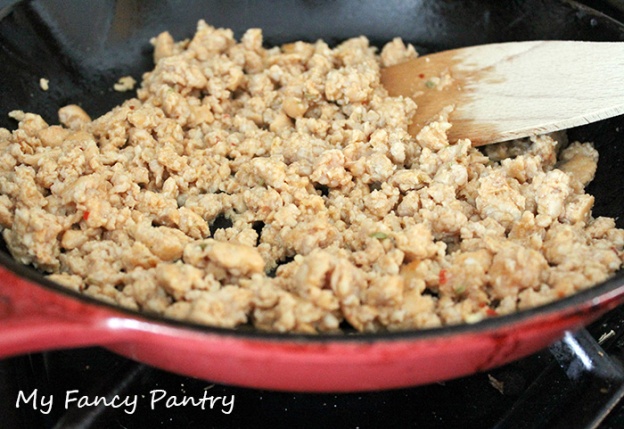 Once the meat was cooled, I rolled out some pre-packaged croissant dough (you can find this in the refrigerator case at the grocery store…usually near the cookie dough).

I topped the dough with some homemade pesto that I had frozen earlier this year (store-bought works fine, too).  When you’re putting the pesto on the dough, be careful not to use too much.  Because the croissant dough is quite buttery and pesto is quite oily, you could end up with a big soggy mess once everything hits the oven.

After the pesto is spread on the croissant dough (or the fig preserves, if you decide to go that route), sprinkle on the sausage.  Top everything with a little bit of cheese–anywhere from 1/2 cup to 1 cup, if you’re using gruyere.  If you choose to use chevre instead, 3 ounces would work well.

Simply roll the dough up into a log and then slice the log into 3/4 of an inch pieces.  The easiest way to slice the dough is to use a piece of dental floss.  You’ll get a clean slice every time!

I toss away the uneven ends of the roll, but if you want to bake those up too, you definitely could.

Place the slices in an ungreased, glass baking pan, and give them a little push down with your hands.  You don’t want to flatten them out too much, but a little bit is fine.

Bake in a 375 degree F pre-heated oven for between 20 and 25 minutes. Once they start to turn a beautiful golden color and your house smells like a gourmet bakery, you’ll know they’re done!  Pull them out of the oven and allow them to cool for a few minutes before eating.

Although these rolls look pretty, they taste delicious too!

I topped mine with a little Parmesan cheese, but I think I would skip that next time.  They’re cheesy enough without the extra Parm.  Once they were cooled, I drizzled the entire pan with some additional pesto and served them with eggs. 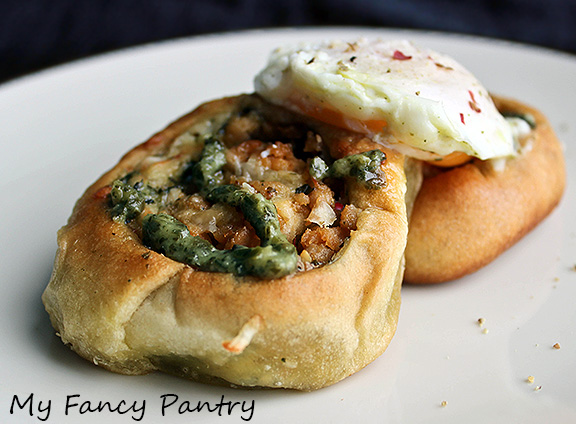 They look like you spent a lot of time making them, but nobody has to know just how easy they actually were!

What meal would you make with Gold’n Plump’s Chicken Sausages?

The giveaway ends Saturday, December 29 at 7:00 p.m. Central Time.  The giveaway is only open to U.S. residents– (sorry!).  Be sure to include a valid email address with your comment…if you win, I’ve got to be able to contact you!

I’ll choose the winner randomly using Random.org’s random number generator.  If I don’t hear back from the winner by Wednesday, January 2 at 5:00 pm Central Time, a new winner will be chosen!

For an additional chances to win the Gold’n Plump Chicken Sausage Sampler Pack:

In the mean time, if you’d like to try these sausages before the holidays are over (sorry, there’s not enough time to ship the sampler pack to the winner before the holidays), you can head over to Gold’n Plump’s website and grab a $1.00 off coupon!  They’re available at Super-Target (and some other stores too, I’m sure!).